Someone Could’ve Warned Me

It wasn’t more then a day after I proposed to Naomi, that both of our mothers began planning our wedding. It was virtually a mix of east meets west.

My mother-in-law is Korean, she moved to the United States almost 30 years ago, and though Americanized in many ways, she still honors tradition. Combine that with my mom, who also comes from a foreign land, Montana, and you wind up with something eerily similar to a Tim Burton film, with Johnny Depp co-starring as the priest.

After a couple of weeks of fearing we may end up walking down the aisle in traditional Korean garments while sporting cowboy hats, we decided to handle it the quick and easy way. So, on August 2nd , 2010 we headed down to the Santa Ana Courthouse in sunny California to make it official. Our mothers’ dream for a big white wedding died that day.

I held my wife’s hand as we walked into the courthouse, followed by her parents and my brother Zac.

I don’t know that we said it to each other, but we were both very nervous.

Now someone could’ve warned me that getting your marriage license is a lot like going to the DMV. We waited in line for a half hour as we watched couple after couple pay the fee, “repeat after me”, and leave.

Finally, it was our turn, “what can I do for you?” asked the gentlemen behind the counter, never breaking eye contact with his computer.

“We need a marriage license, and would like a civil union performed today,” I replied.

“Ok, that will be $68 and please fill this out,” he mumbled, while still not looking from his ever so important computer.

As I filled out the paper and we both signed; I looked at my wife, smiled and told her, “This will be a day we’ll never forget.” I said that not only because we were getting married, but for the oddness of it all!

Once the paperwork was finished and the government got its money, the “computer guy” told us to wait in the hall and he’d be out shortly to perform the ceremony. A half hour later, we found ourselves standing under a wooden arch, covered in dusty silk flower arrangements, watching our officiator throw on a black robe that he clearly purchased from Jostens.com.

I think initially he stuck his head through the armhole and had to re-adjust.

I could see my brother out of the corner of my eye sipping his coffee to avoid cracking a joke.

“Are we ready to start?” He asked.

“Yes” we both replied.

All eyes went to her as she said, “my daughter didn’t give me much warning for this and she doesn’t have flowers!” She continued, “I saw some on the desk in the office can I borrow them for her?” I love Connie for that moment in my life because I can guarantee it has happened to no one else.

At this point my brother Zac is trying not to laugh so hard he may have been choking, and the guy running the show was so entirely shocked he stuttered out what sounded like all the vowels of the alphabet, but no real words.

In true Naomi fashion, she shot her mom down faster than Wyatt Earp could draw his pistol. This generally happens to all of Connie’s “suggestions”.

Now I’m hoping that most of you have seen the wedding scene from “I Know Pronounce You Chuck and Larry”, because the officiator read verbatim what Rob Schneider said in that movie. Including the part where he says, “Now the rings are a symbol of eternity, because in a ring there’s no beginning, there is no end, ’cause it’s a circle,” All in broken English.

My wife and I both busted out laughing. As we regained our composure it felt surreal. What an amazing moment to commit your life to the one you love for better and for worse.

Although it wasn’t the grandest wedding, or the fanciest; it was perfect. I wouldn’t change it for the world. In reality, it was fitting. It just played right into all that is the story of us. Someday we will renew our vows in front of our family and friends and it will be wonderful. But this was a one of a kind story I got to share with my wife, and its something we can laugh about till we’re old and partially gray.

Till next week everyone!

“Someone Could’ve Warned Me” warning of the week:

DO NOT go to Whole Foods, or any organic food market, without reusable grocery bags. You will be JUDGED as an amateur, and a pariah. Consider yourselves warned. 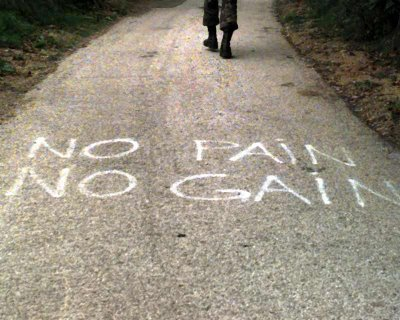 Without a doubt week 2 proved to be far more challenging than week 1, for various reasons.

First of all someone could’ve of warned me that intense workouts along with dieting doesn’t get you a pass on your dad duties.

My son Aiden has picked my toughest week to want to walk all over the neighborhood for hours on end. He also now loves for me to stand next to the toy box, bent over, as he points to things he wants me to grab for him. So I have been using the power of positive thinking and just keep telling myself, “the more active you are the quicker your goals are going to come”.

Not to mention every moment I get to spend with him is truly a blessing. No amount of soreness could keep me from smiling at him, as he gets excited over the littlest things. There is a lot to be learned from children that we forget, as we get older; like the greatness of simplicity.

The second thing that has plagued me this week is the nerve pain in my leg…by evening everyday it is on fire. So much so that Justin had to make some adjustments to my workouts.

A little personal update from the medical side is that on May 29th I will be receiving a steroid injection to help alleviate the pain. I’m really hoping for a good outcome, because if it fails my next option involves surgery, which would make it an even longer road to achieving my fitness goals. Honestly though I’m taking it all in stride because no matter how hard the days are, and the diet becomes, after each workout I feel great.

My goal is to conquer one day at a time.

Justin added a special challenge for me this week that I wanted to share. He asked me to pick a music playlist to start my days with, to help set the tone. I have actually been using it to get me through my workouts also. It’s a solid mix of up beat songs from “The Silver Sun Pickups”, “Anberlin”, and a couple slow jams as well.

You’d be surprised how much a slow song allows you to concentrate and grind out some of the tougher moments in your workout. I also have a couple of songs by the one and only Zac Poor, my brother, my favorite singer of all time. I hope you all will be listening to soon.

As this week came to a close I have dropped another 4lbs, giving me a total of 12lbs in two weeks. If I can keep up this pace, I will be very happy!

Have a healthy next week everyone and remember to power through with some of your favorite jams, Bon Jovi is not allowed.

I told someone the other day that I was on the Paleo diet, and their reply to me was

“Oh you’ve got to me kidding me, you mean you eat like a caveman.”

I thought to myself, “Yes exactly, I hunt for my meat, and gather roughage when I can find it. I also grunt at others in order to communicate.”

I have been doing a ton of research and every week I’m going to provide you with a healthy alternative for a number of Americas favorite diet staples. Recipes that truly make you feel like you can stick to this diet. Not like those fake-boxed meals from unmentioned companies that promise you can eat whatever you’d like. I take no credit for these recipes, and will gladly site the source for you to do your own investigating.

Heat the olive oil and brown the ground beef along with the onions, and garlic over medium heat. Add all remaining ingredients to pan. Bring to a simmer and leave on low heat, partially covered, for 35min.

Cut the spaghetti squash in half, length wise, and scoop out the seeds. Place in a microwave safe container, cover, and cook on high for 10min. After removing from microwave leave covered for an additional 10min. Then, using a fork, remove the squash from the skin. Should be a perfect noodle like texture.

Tips: It is not lost on me that with kids sometimes you don’t have time to prepare a sauce. I have found that there are some good organic tomato sauces at the store with no additional sugar added. Also, if microwaving isn’t your thing, you can roast the spaghetti squash. Drizzle each half of the squash with extra virgin olive oil, salt, and pepper, and place face down on a baking sheet. Roast at 375° for 40min.

Tyler
@PoorTyler
Someone could’ve warned me

GET THE FREE 5-DAY COURSE